And to think I came very close to missing out on what may prove to be the best performance by an actor for the 2016/17 theatre season. What with one thing or another, there was not a single open date on my calendar for several weekends in a row. But when someone connected with The Matrix Theatre told me that the show they were currently performing was something I might really like to see, I cleared an evening and went to check it out. The show I saw turned out to be on the final weekend of the production so I was unable to write a review before it closed. As it turned out, word of mouth was again the best kind of review a show could ever have; the seats were filled and the few remaining performances were already sold out. For the books, here’s my review for a wonderful show I almost didn’t get to see.

“2.5 Minute Ride” is an autobiographical one-woman show by playwright Lisa Kron. Both personally intimate and historically wide-ranging, the play tells the story of the Kron family as told by Lisa, the daughter of Walter, the family patriarch. Lisa is played by Luna Alexander, and though Kron’s script is itself a brilliant piece of writing, it’s Alexander’s performance that makes this production such an unforgettable evening of live theatre.

Lisa begins her story by telling the audience she’s in the process of making a video of her father’s life. Walter is Jewish and German, and his history goes all the way back to the Second World War. Lisa is a lesbian, though Kron offers that bit of information more to be able to pass on a few amusing anecdotes than to create any kind of soapbox. Lisa begins by talking about her family and showing slides, and for a moment it’s almost as if you’d mistakenly sat in on a lecture in the college course Kron 101. But the slides show up as blank squares on the wall and the pointer Lisa uses to call out various relatives has no more substance than the twirls she gives with her empty hand. The “2.5 Minute Ride”, it appears, is going to be an imaginative piece of theatre.

Lisa’s story centers around three trips. The first is undoubtedly a familiar one to many Michigan families. Once a year, the Kron family makes the drive from Lansing Michigan, where Walter settled when he came to America, to Sandusky Ohio because Walter loved to ride roller coasters. And where in the mid-west can you find them any bigger or any faster than Cedar Point. Walter’s fascination with roller coasters and the excitement they generate seems strange in light of the fact that he’s nearing 80, nearly blind, has diabetes and a heart condition, and that he should have had enough excitement to last a lifetime escaping from Nazi Germany as a teenager during the War. Walter’s parents were not so lucky, losing their lives in the concentration camps. The second is a trip to Brooklyn to attend the wedding of Lisa’s brother who had to go online to find a bride because there weren’t any eligible Jewish woman in Lansing. Lisa has an obvious love for everyone in her family but she’s not above talking about (and enjoying) their many idiosyncrasies. Both of those trips are populated with stories about eccentric members of the Kron clan, like the aunt whose home was filled with every kind of cosmetic imaginable because she felt sorry for the Avon Lady.

The third trip finds Lisa and her father returning to Auschwitz to try and find meaning in the horrific events of Walter’s past and the death of his parents. Walter had returned to Germany once before after the war. He was part of a group interrogating German prisoners as to what role they might have played in the operation of the death camps, often making evaluations that could send an ex-German soldier to their death. 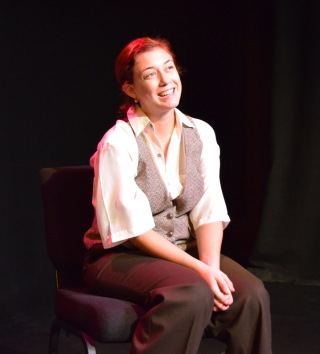 The tempo of “2.5 Minute Ride” is much like the ups and downs of the roller coaster rides Walter liked to take. One of the themes in Kron’s play is that joy and happiness and sadness and tragedy are all part of the same ride. And the best part of the ride is Alexander’s performance. It so rings with authenticity that it’s easy to forget it’s Alexander the actor standing there telling all those wonderful stories written by someone else and not the very person who lived them instead. Alexander has the capability of expressing a wide range of emotions and delivering them with honesty and sincerity. A look of bemusement, a tremble of anticipation, a quiver of fear, laughter, tears, and the pain of resignation…her performance was an event to be enjoyed and savored.

There was no standing ovation the night I saw the show, and perhaps rightly so. Standing ovations are given out too frequently nowadays, and the practice has lost much of its sincerity. However, that night the applause lingered, lingered long after Alexander had left the stage, and lingered some more, and all that was left when it was over was to go home in silence because to speak was to somehow break the spell that had been cast by that special night of theatre and the incredible performance of Luna Alexander.

By its nature, theatre requires the contributions of talents above and beyond those of the playwright and actor. Director David Wolber is to be commended for giving the production verve and proper movement. Alexander used the whole of Matrix’s thin, rectangular staging area to her advantage, working both ends of the audience in her performance. Costume designer was Lauren Montgomery, lighting by Amy Schneider. Sound and Projections designer was Megan Buckley-Ball and stage manager was Colleen Cartwright.