War changes everything, including the fortunes of the Gaesling Family in playwright Sharr White’s drama “The Snow Geese”, currently having its Michigan premiere at Meadow Brook Theatre. “The Snow Geese” opened on Broadway in 2013, but in style and manner it harkens back to the formal plays of Chekov and Ibsen. The play deals with family, the individual personalities that make it up, and the problems that arise when those personalities clash.

Favored son Duncan Gaesling (Tim Stone) is leaving on the morrow with his regiment to fight the Germans in the trenches of France in what will come to be erroneously called “The war to end all wars”. In honor of his departure, his mother Elizabeth (Debbie Williams) has gathered the family at their lodge outside of Syracuse, New York for the traditional opening of the hunting season. Present at the gathering are Duncan’s brother Arnold (Ricky Gee), Elizabeth’s sister Clarissa Hohmann (Julia Glander), her German born physician husband Max (David Wolber), and the Gaesling’s Russian maid Viktorya Gryaznoy (Sara Kmiec).

Though the play begins with Duncan, who has inherited the spirited personality of his recently deceased father Theodore (played by Ron Williams in a short but memorable flashback  that takes place during his courting days with wife-to-be Elizabeth), vigorously preoccupied in a dance of the times,  the atmosphere soon turns dour. Without a single enemy shot being fired in the homeland, the war has extended its tentacles into America by way of the anti-German sentiments Max has experienced in his adopted country, and with the stories Viktorya has brought with her concerning her mistreatment at the hands of soldiers. But the horrors of the war in Europe still bare a shadowy kind of existance to be experienced through newspapers and hearsay. When the practical-minded Arnold, who has gone through the ledgers after his father’s passing, makes it known that he has discovered that his father has let the estate’s finances lapse into bankruptcy, a new and more immediate crisis confronts the family.

The play covers a lot of territory, and most of the first act resounds with the scattershot imprecision of a shotgun blast as it haphazardly lays the groundwork for what it has to say. By the time the second act comes into play, the parameters of White’ principal intentions are clearly focused: the tension that exists in the sibling rivalry between the two brothers and the effect of the war on both the nation and the Gaesling family. If there’s one word that can encapsulate the various issues which the play raises, it’s change, the change that’s occurring throughout the war-torn world and the change that’s taking place within the Gaesling family.

Under the direction of Travis W. Walter, Meadow Brook’s production of “The Snow Geese” is both elegant and emotional. The cast contains some of the best local talent working in the acting profession. The flashback scene where the young Theodore comes a-courtin’ is a wonderfully choreographed expression of the physical attraction and virtuous sensuality of young love. Kudos to both Williamses. The set, designed by Jen Price Fick with assistance from Krystal Smoger, is up to Meadow Brook’s usual superior standards, the broad beams that tower over the stage floor a constant reminder of the Gaesling Family affluence that may soon be gone.

Costume design is by Corey Collins, assisted by Shireen Unvala. Lighting is by Reid G. Johnson, sound by Michael Duncan, and dialect coach is Karen Sheridan. Stage manager for the production is Terry W. Carpenter, with assistance from Sarah Lin Warren.

“The Snow Geese” runs through April 15th. Tickets are available by calling the Meadow Brook box office at 1.248.377.3300 or going online at www.ticketmaster.com. Meadow Brook Theatre is located on the campus of Oakland University in the city of Rochester. 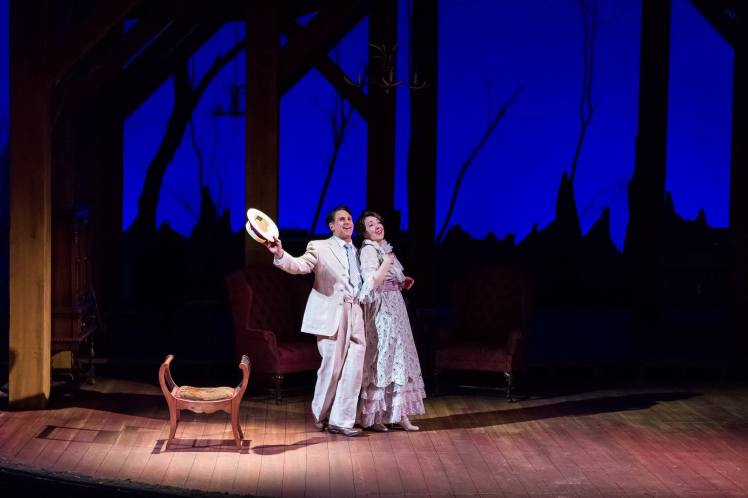